From Viridian TTRPG Wiki
Jump to navigation Jump to search

Dweman resemble Duergar of gargantuan size, from their stout-powerful frames to the colouration of skin and hair, although Dweman tend to lean towards red, oranges and blacks more than Duergar do. As Dweman and Duergar are so similar except for their fully-grown size, the Dweman can be seen as the giantish cousins of Duergar and the smallfolk cousins to Duergar respectively. The size of Dweman heads are relatively smaller than Duergar but the size of their hands and feet are maximized for extra weight and power into their swings as well as their footsteps. Dweman are just as broad and stocky as ever.

Dweman tend to have redder features than Duergar, hair and beards can sometimes take on a fiery glow. Dweman with lighter complexions tend to be tanned light-orange to brown and even black, the only other colours tend to be white and grey for their older or darker-skinned brethren.

The Dweman are based on traditional Dwarves but with a mixture of Fire-Giant qualities and life-style, although in a nutshell: Dweman are a true-giant version of Duergar. Dweman don't have the spell-like abilities like the Duergar do, instead adopting Fire-affinity traits where they highly resist or even absorb heat-based attacks and slightly resist cold, they otherwise inherit each other's Stout-Powerful and have similar archetypes. An easier way to tell Dweman and Duergar apart aside from base size category is that Duergars are discreet and Dweman are unabashedly headstrong. 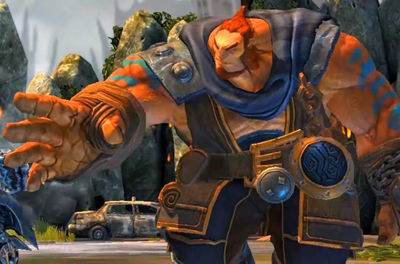 Dweman are super strong, tough and heavy, though they tend to be a bit shorter compared to their true-giant allies, they still absolutely dwarf most other races. As they are culturally encouraged to uphold tradition, every Duergar has some training in crafting and repairing machines and equipment.

Dweman have a culture surrounded by crafting and engineering, these Duergar use their intelligence to work machines and crafting like no other.

Some Dweman gain a special quality where the flames of heat enrich their soul, not only do they resist fire, but they can even heal from it instead.

Dweman are adept at wearing heavy armours and outfits without hindering their mobility, however their stout forms do make them less agile than most races. This is further compounded by their dense, heavy bodies, which make them even harder to forcibly move.

Dweman can see in pitch-black environments up to 60ft, Dark-vision is monochromatic, which means in areas absent of light, they can only see in shades of grey, not colour.

Dweman revel in the heat of the furnace and relax in the magma of volcanos, they are totally immune to the effects of heat.